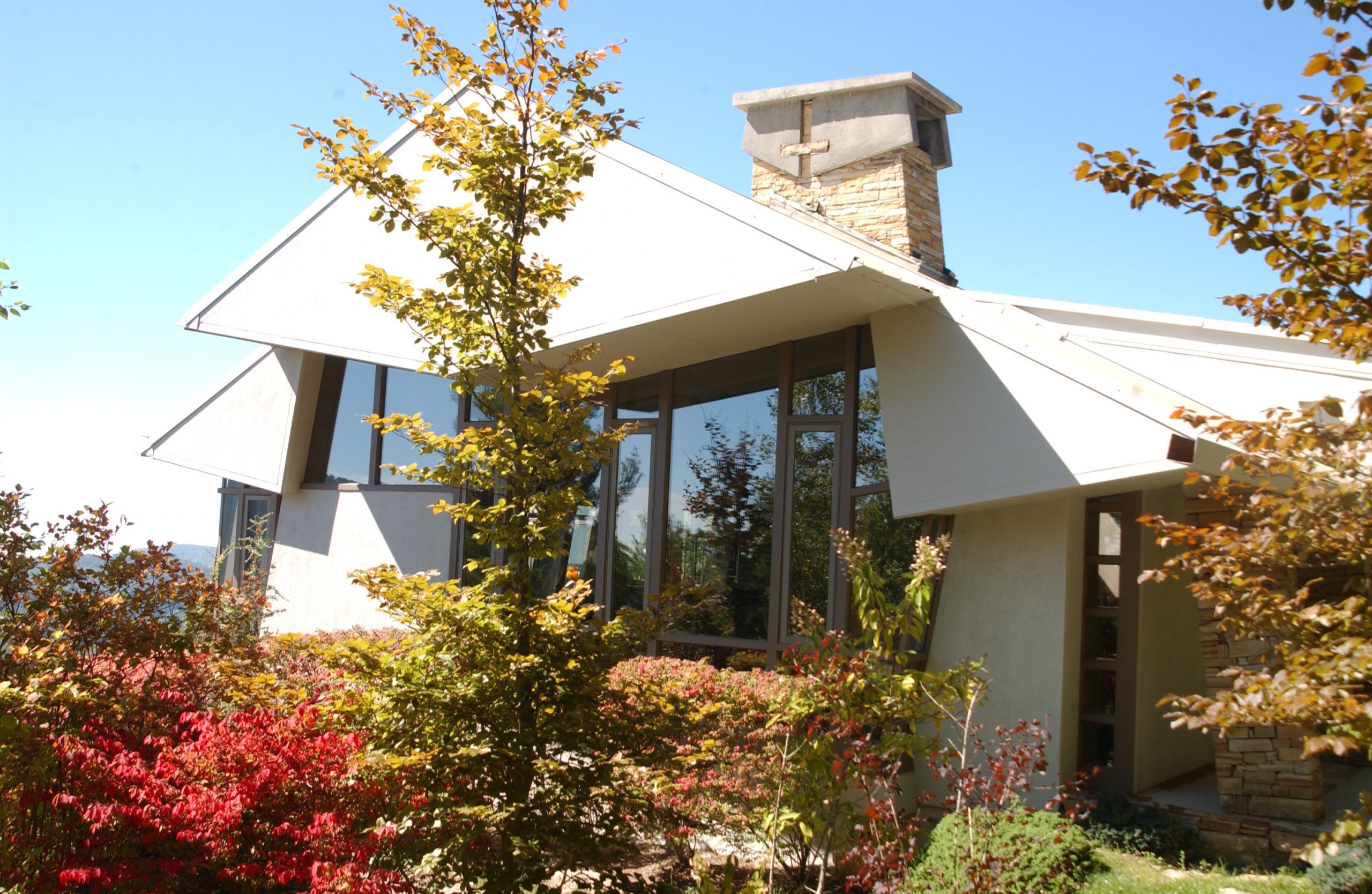 The design was created to emphasize the incredible view of Whiteside Mountain. Fox was given two criteria. First was to allow the mountain view from everywhere in the house. Second was a large covered deck, running the length of the house, for further enjoyment of the Whiteside view. A conventional covered deck would block the view from inside the house.

Fox created a cantilevered roof over the deck in an uplifted wing design. For symmetry, the opposite roof on the north side covering the carport is similarly cantilevered. Supporting the load of the cantilevered roofs are massive steel I-beam support columns angled on 2/12 slope (16.6 degree angle). The  beams are 12 inch I-beams custom fabricated into a framework that is incorporated into the aesthetics of the design.

Whiteside Mountain, at 4950 feet is the major landmark in the area. The KiteHouse was designed to maximize the view. 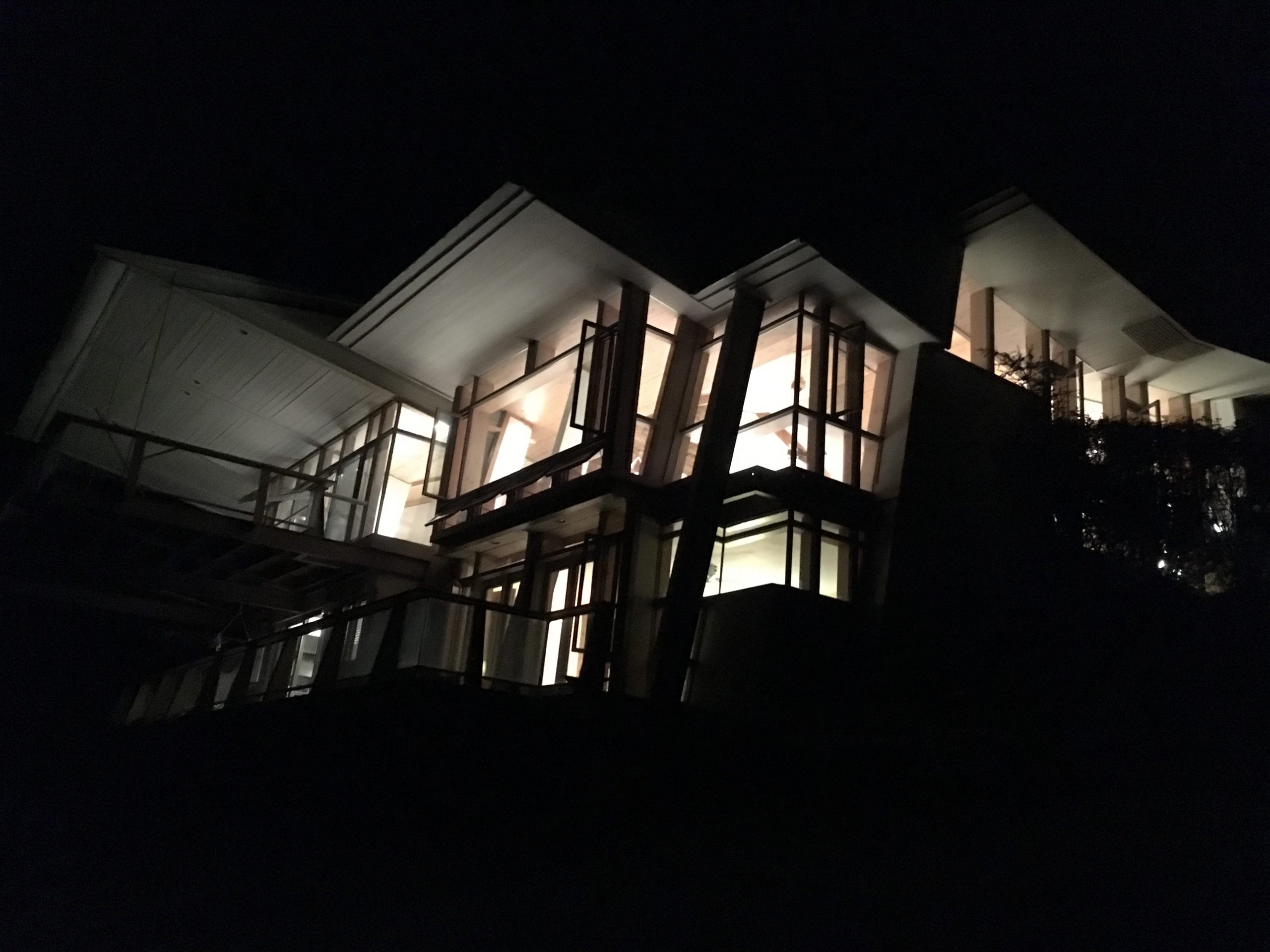 At night the cantilevered deck is even more appreciated. Its design allows viewing of the sky, moon, planets, and constellations.

On the east side of the house is a waterfall feature  with two streams cascading through three ponds and across the natural rock formation. It is a closed loop system with an electric pump and gravity. 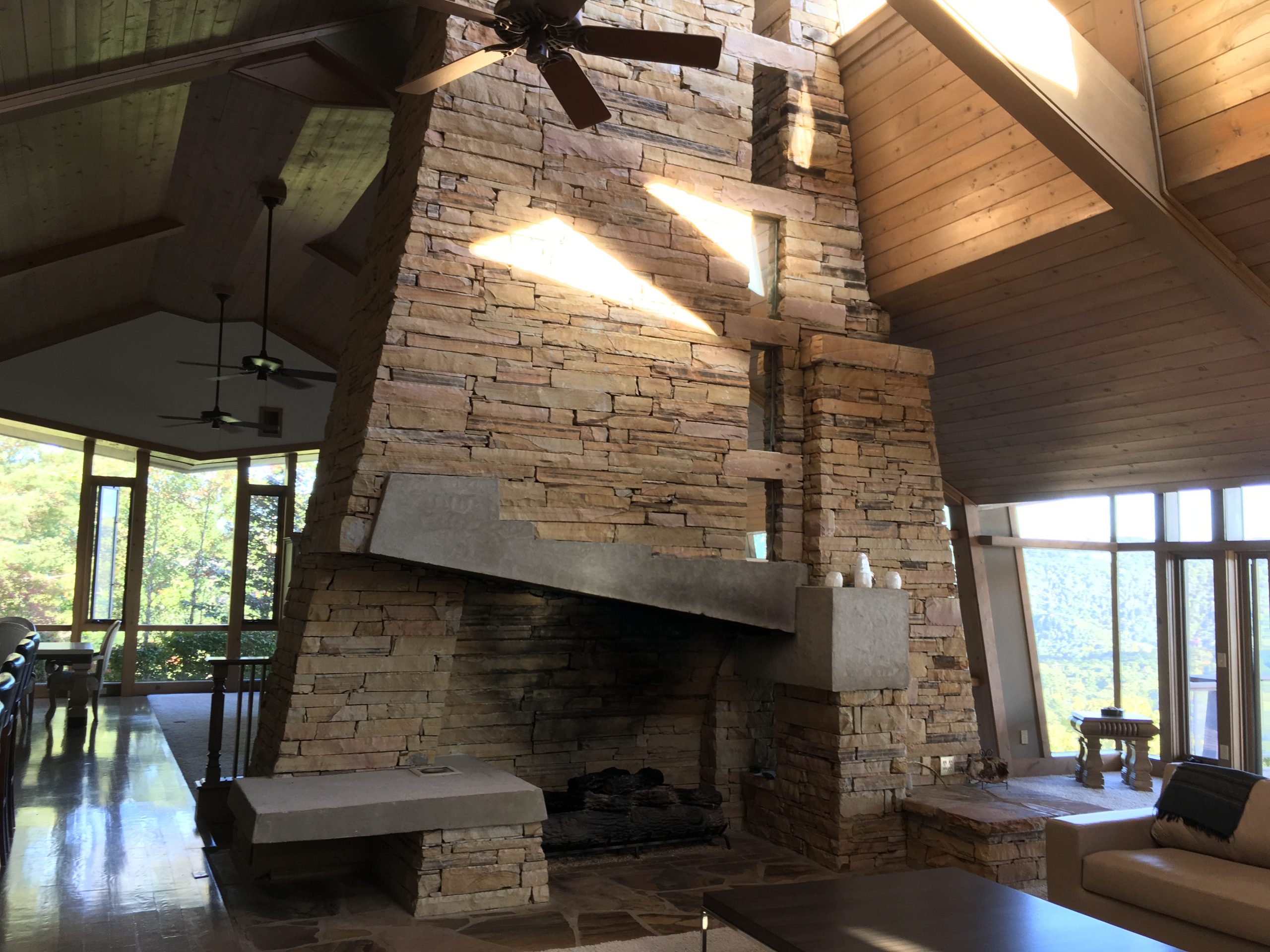 The Great Room features an eighteen foot ceiling and a massive stone fireplace. Skylight windows brighten the space during the day. At night there is a view of stars and planets. Often the Moon can be seen from the kitchen sink.

In 1994, the Sonny Lee house was acquired by the Gantars for its prime, 2.56 acre lot in the Cowee sub-division, with the idea of building a new house. Jim Fox was commissioned with some basic requirements; a view from everywhere, a covered deck, two bedrooms, no kitchen. Mr. Fox saw the potential of using the existing structure as a building aid. 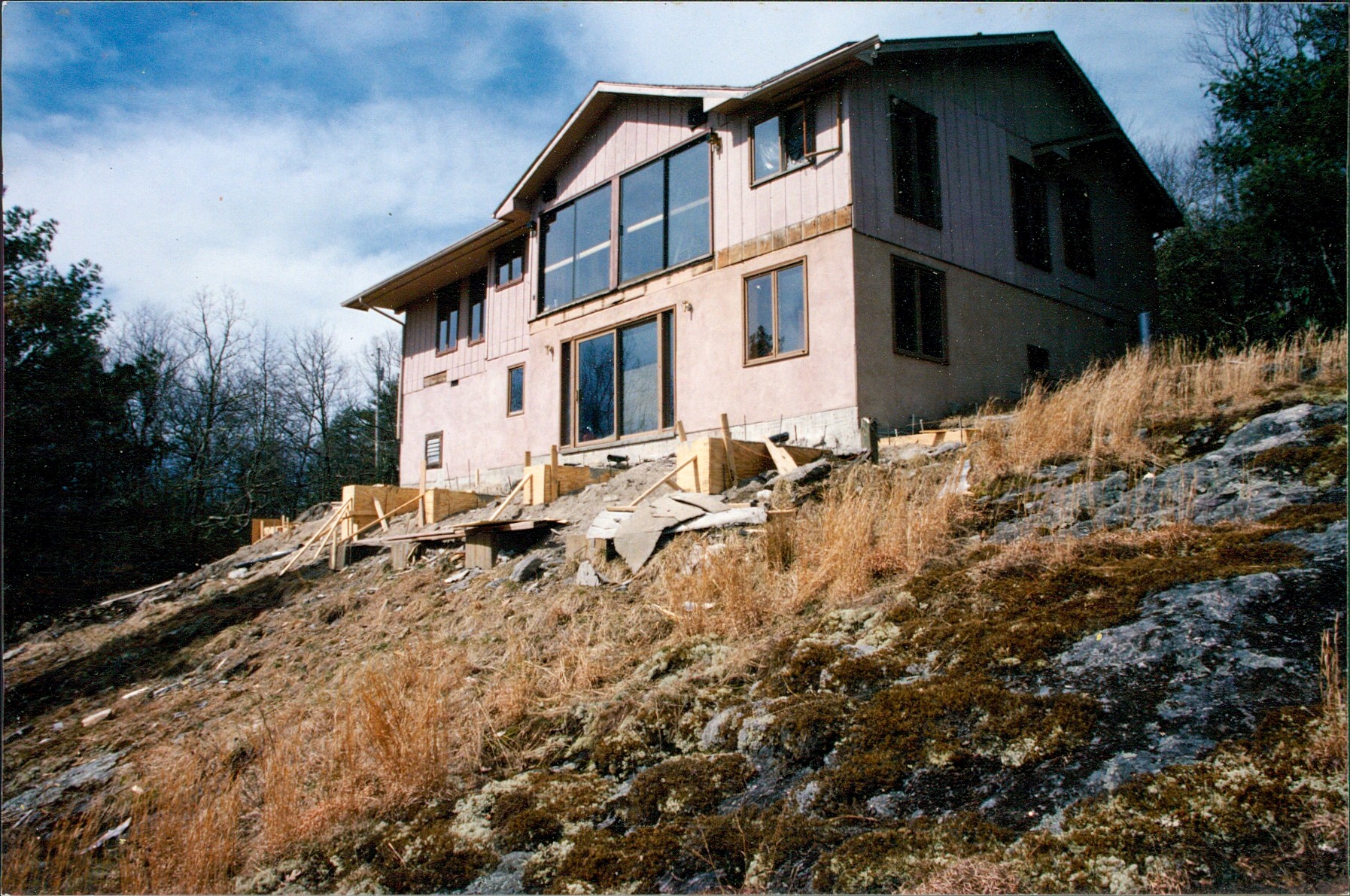 The construction plan involved transporting sixty foot steel “I” beams (12″ ribbed) to the site and then fabricate the steel structure of the house on site.

A crane lifted the fabricated beam sections into positions that had been notched in the original structure; providing temporary support during final welding, pouring of the foundations, and assembly.

Mr. Fox took these photographs as proof that he was on site daily, overseeing every detail. He is a legion among the local tradesmen because he would get his hands dirty in demonstrations of “how to do it.”

The phase one project was completed in 1995. The east end of the house looked much different than it does today. The west end is largely unchanged.

When phase one was finished, the  fireplace was at the east end of the house. The Great Room was half the size of today’s Great Room.

In 1999, the Hendrys bought the house and commissioned Jim Fox to design and supervise a major addition which would include an actual kitchen with a Whiteside view. The Great Room would double in size with the addition of a dining room. Phase two work was completed in 2000. 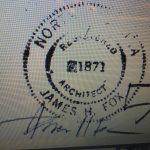 The artwork of James Fox, Architect, pre-CAD design expressed with paper and pen…….. 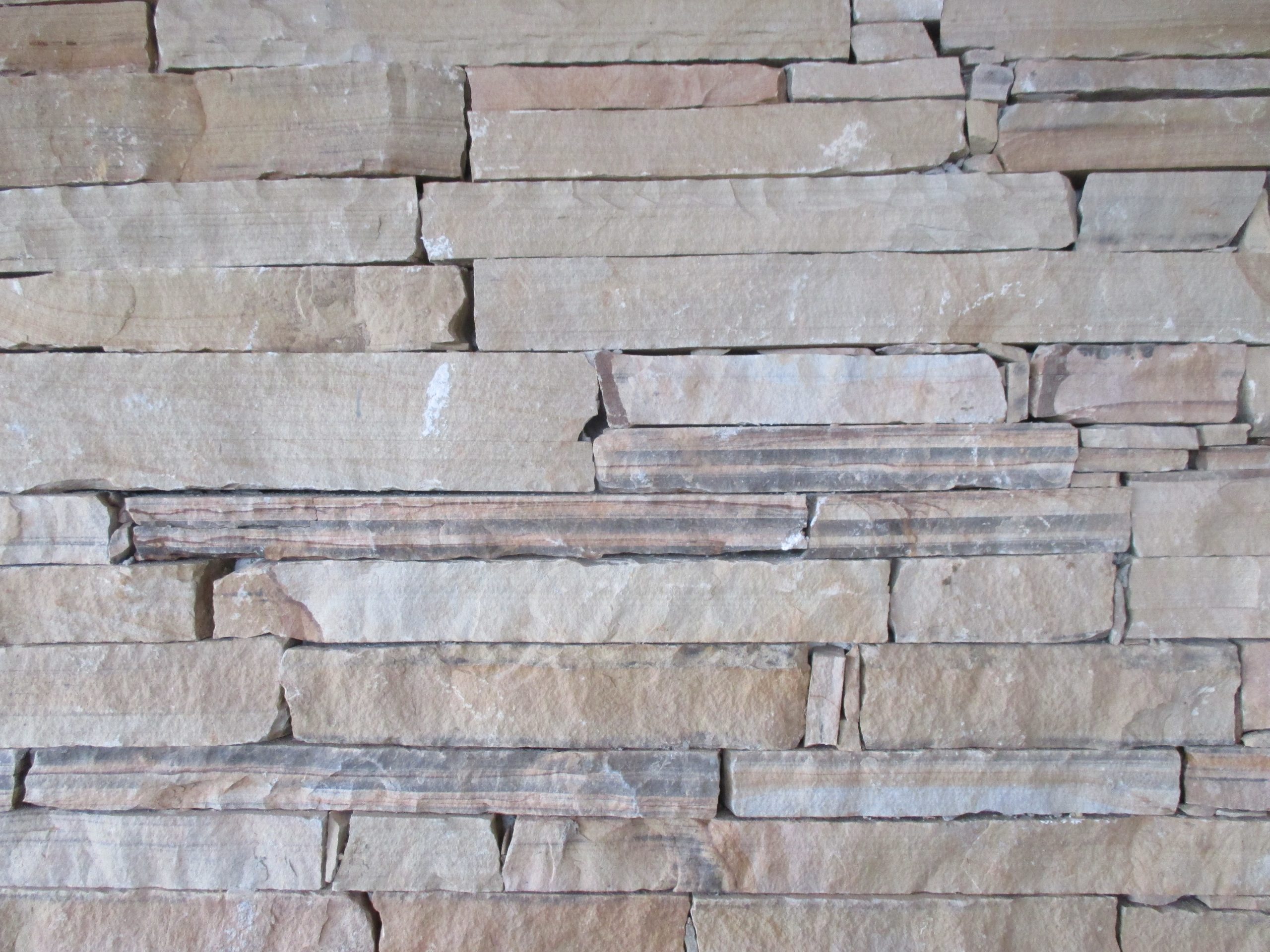