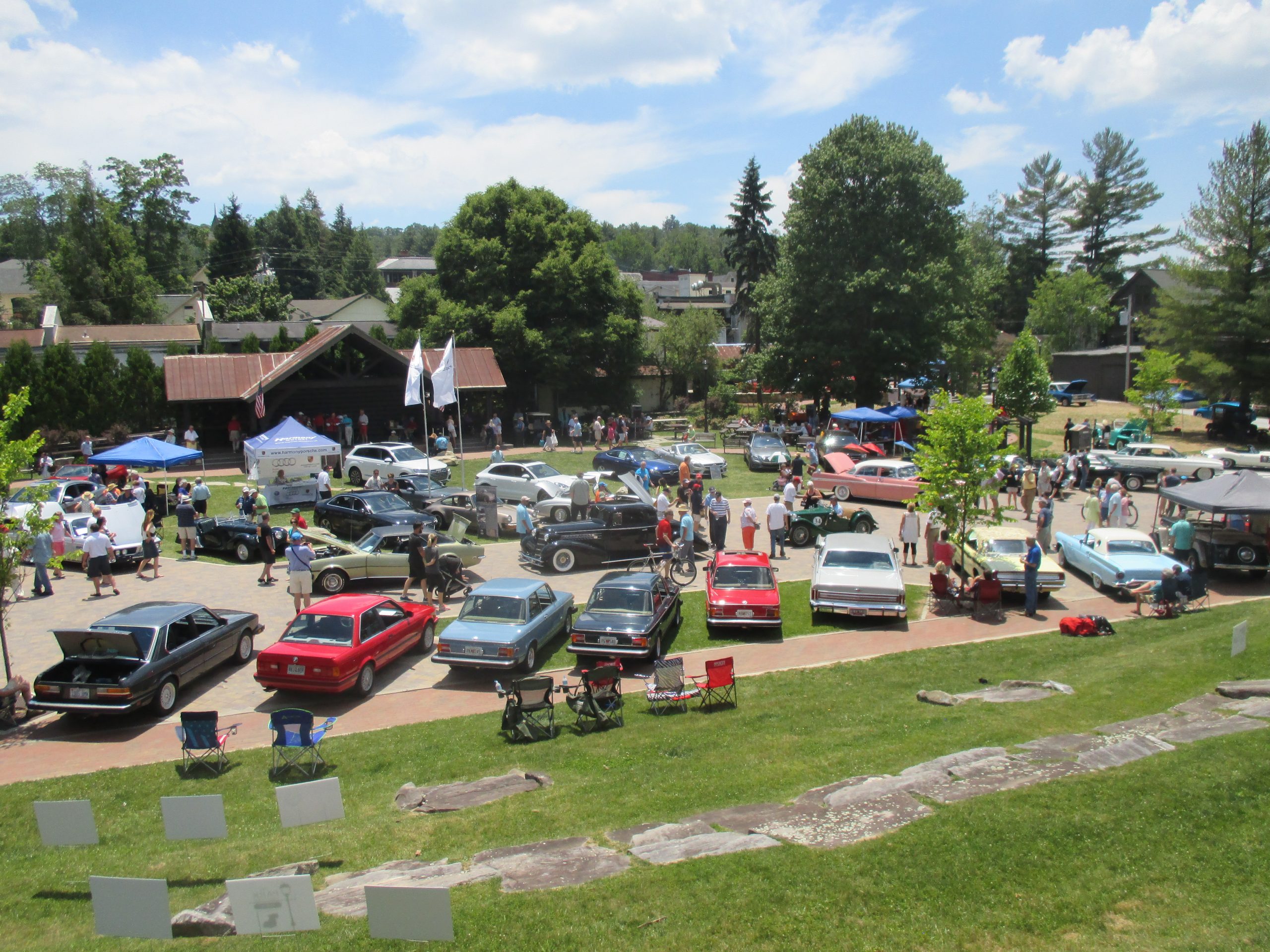 One of the most coveted and iconic collector cars is the Mercedes 300 SL “Gullwing” of 1955 – 1958. The Highlands area has a summer resident who has one and has brought it to HMF for several years. In 2015, Mercedes Benz was chosen as that year’s featured marque. Our local owner contacted other owners. Our special Mercedes year really was special when three “Gullwings” were lined up.

Many very interesting cars have graced the show field of the Highlands Motoring Festival. There have been past LeMans entrants, one of a kind customs, pre-war classics, muscle cars, antiques, sports cars, utilizes, mid-century classics, and sedans of every ilk from America, Europe and beyond.  The most unusual was probably the Tupolev Cosmonaut Retrieval Vehicle. 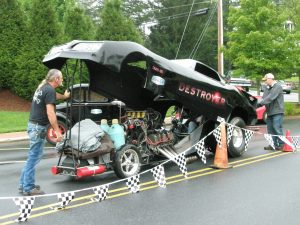 One year, a full blown funny car was given permission to startup and demonstrate with some revving but was derailed by a dead battery. The Highlands Fire Department came to the rescue with a jump from one of their fire trucks to the cheers of bystanders.

Every car on the show field is special to someone.

History of the “Highlands Motoring Festival”

The inaugural event took place in September, 2008 with 114 cars in attendance. The show venue was created by blocking off Pine Street & utilizing the Park & the parking lots of Bank of America & Entegra Banks. The cooperation of the Town of Highlands & both banks made the event possible. Good weather brought a large turnout of spectators. Support of the Highlands business community was solidified. Local car enthusiasts stepped up and volunteered to help. The vision of an annual event had become reality.

Since then the festival has continued uninterrupted with net proceeds going to many local charities including The Hudson Library, Rotary Club of Highlands, The Emergency Council, REACH, Cashiers Highlands Humane Society, the Community Care Clinic, and the Literacy Council of Highlands.

For the first four years, the Motoring Festival was held during the month of September. To eliminate conflicts with some of the major car shows, the event was moved to July for two years. Finally, the second Saturday in June was determined to be optimal, a tradition that started in 2012 and continues. And the event has expanded in scope, now including driving and social gatherings spread over four days. When major infrastructure work was required at on Pine Street Park in 2013, the Motoring Festival venue moved to Highlands Rec-Park for two years. For 2015 the event moved back to Pine Street and the renamed Kelsey Hutchinson Park or Founder’s Park.

Over the years, the financial strength of the Motoring Festival grew at a 20% plus rate. This has been the result of overall greater participation, local sponsors, and the addition of Platinum Sponsors. In 2015 over $24,000 was donated to the Literacy Council of Highlands. The festival continues to operate as an all-volunteer organization.

In 2012, the Organizing Committee was approached by the Alfa Club about special recognition. That group promised and delivered a strong field of Alfas, competing in the event’s first “Featured Marque” class. In succeeding years, featured marques have been Porsche, British cars, Mercedes, BMW, and the cars of Italy.

In recent years the Festival has grown to include four driving tours, two car shows, a parade, a welcome party, a concert, and an evening gala.

Every car on the show field is special to someone. And that is the point of the event. These “Gearheads” turned out to be very social and generous people. The Highlands Motoring Festival is delighted to host them, every year, on the second Saturday of June.

HMF is a 501.c3 non-profit NC corporation. Over $160,000 dollars have been donated to local charities. The current beneficiary charities are the The Literacy and Learning Center, REACH of Macon County, and the Community Care Clinic. Over seventy five volunteers work, without pay, to stage the annual events. The Town of Highlands generously dedicates endless resources to the cause.

Enjoy this collection of HMF poster art. It reflects the ever changing character of the festival: 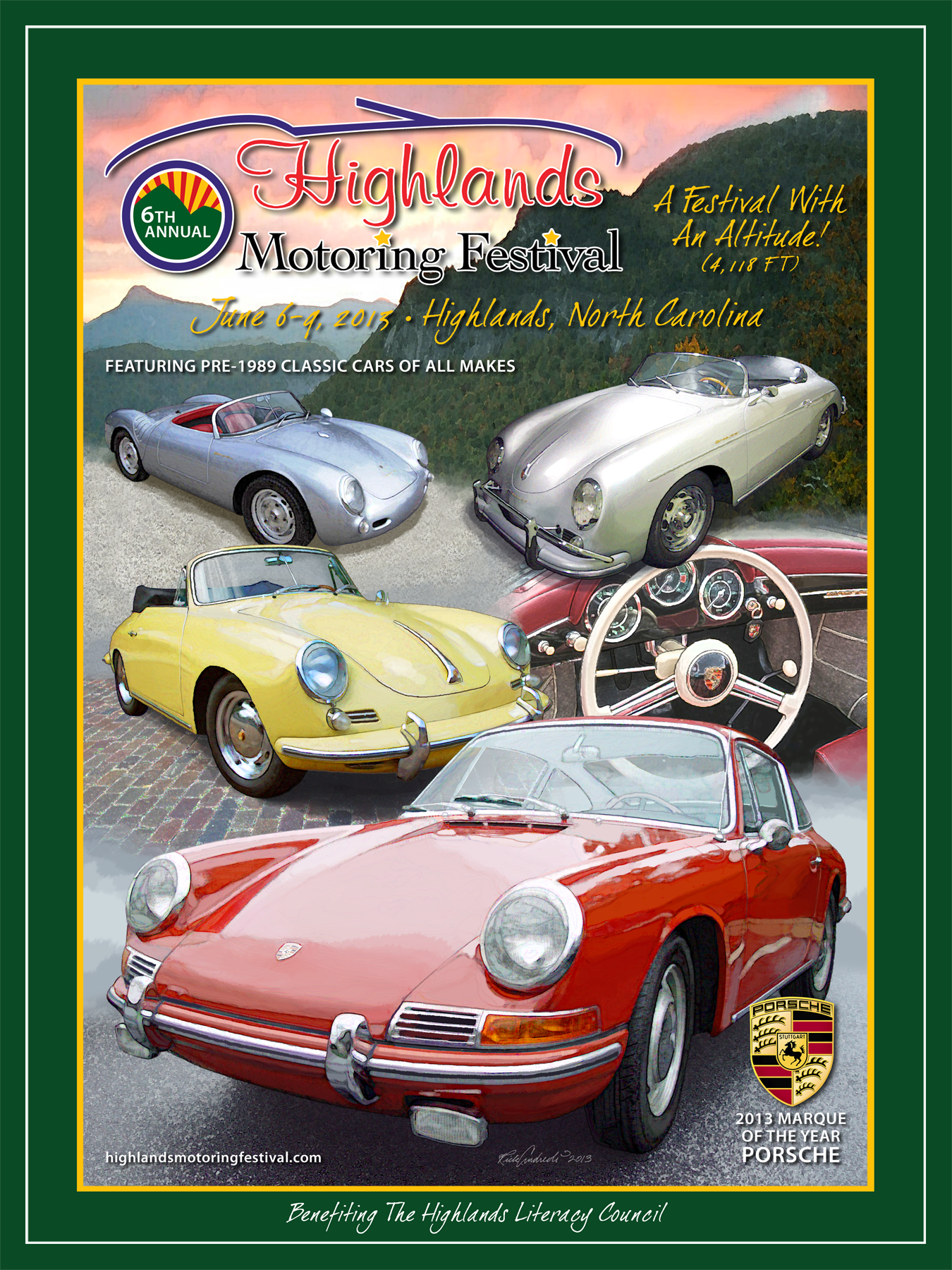 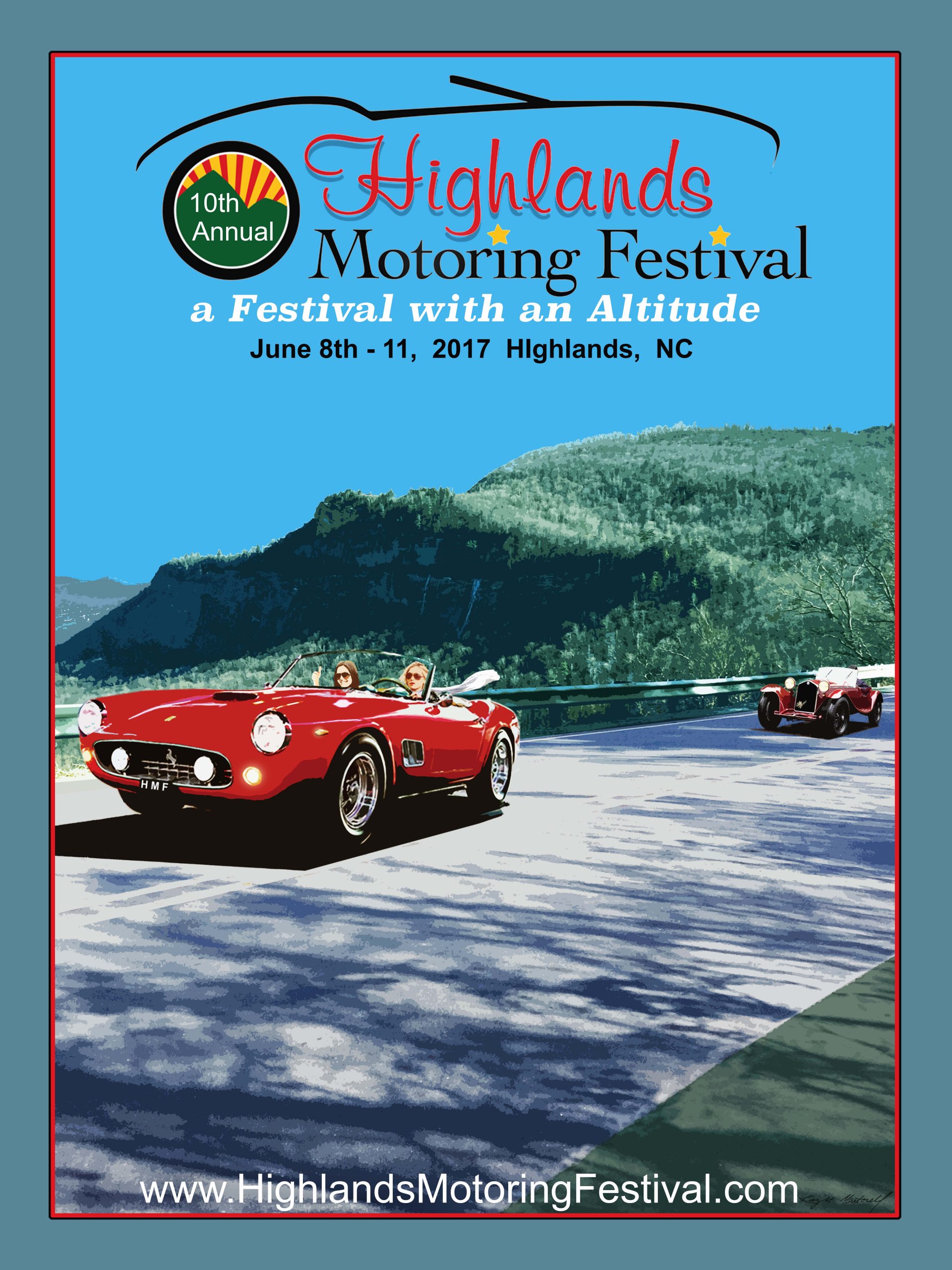 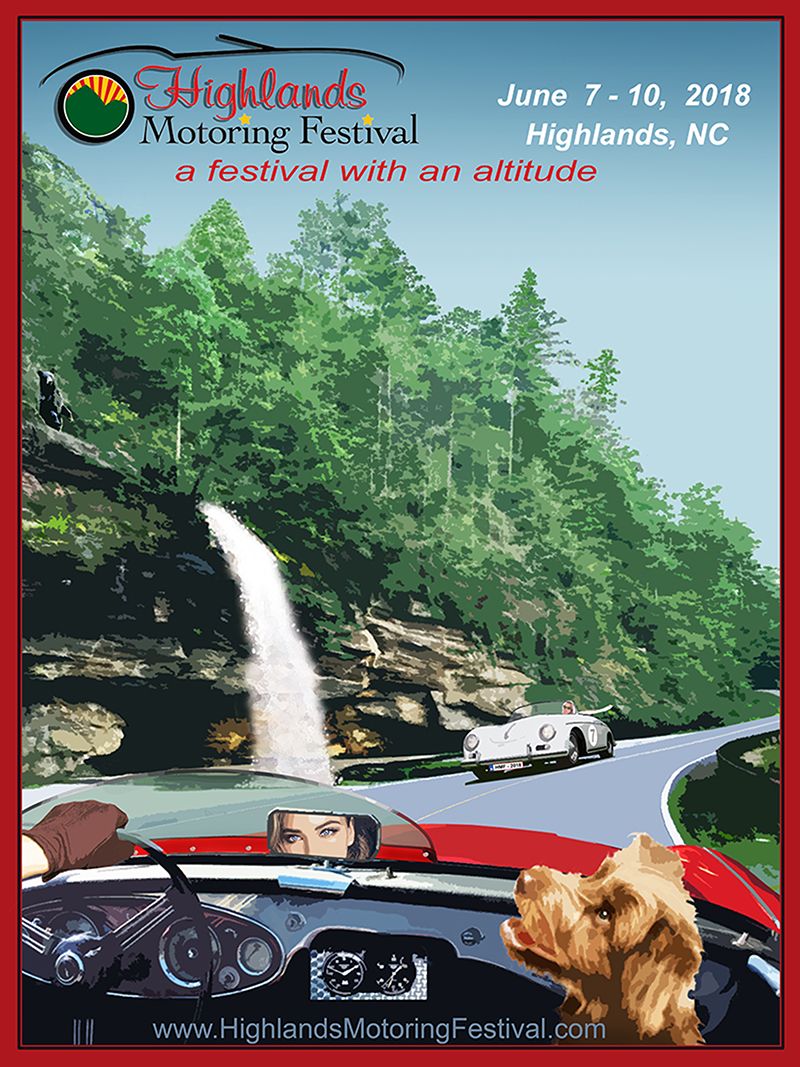 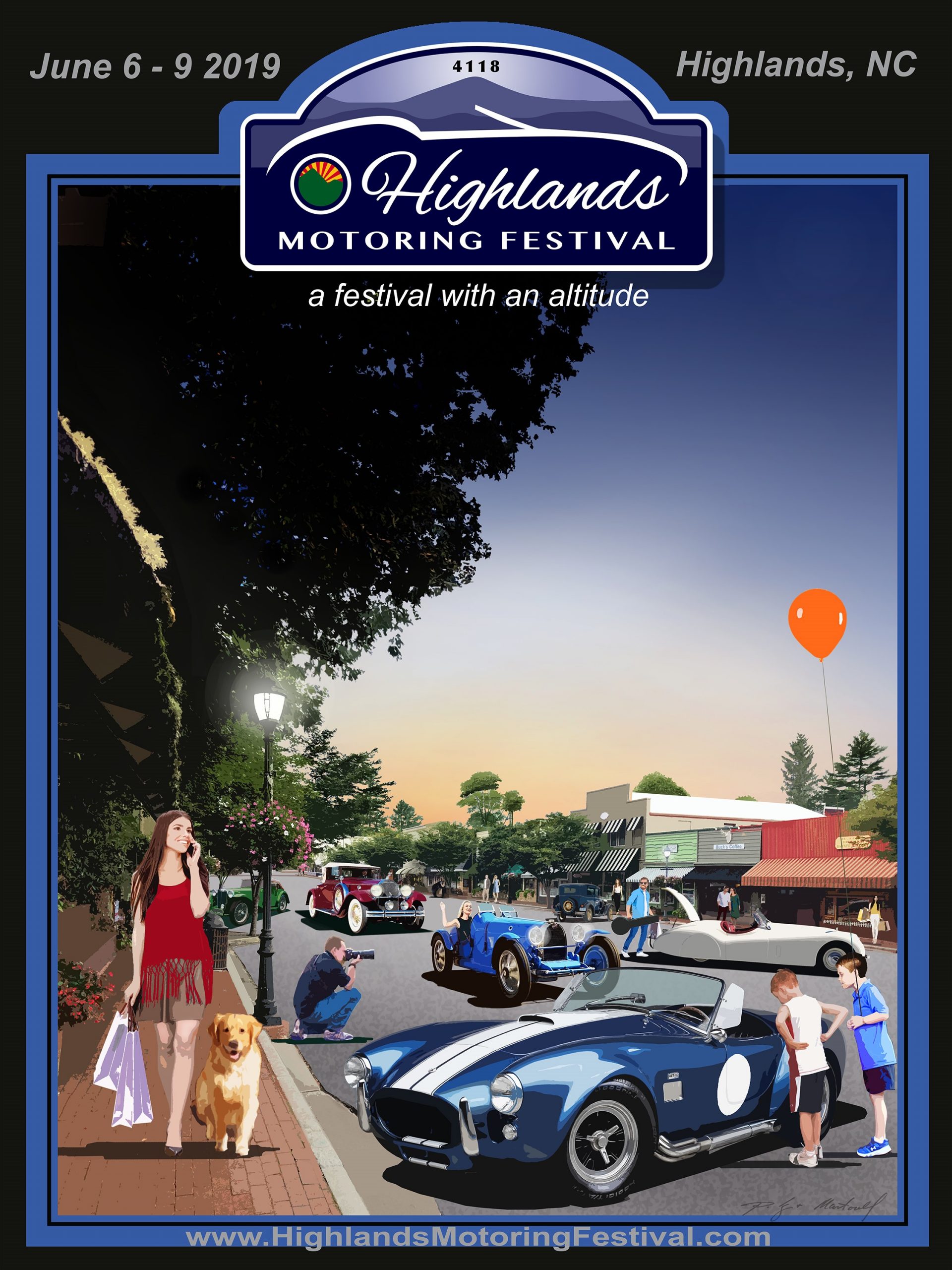 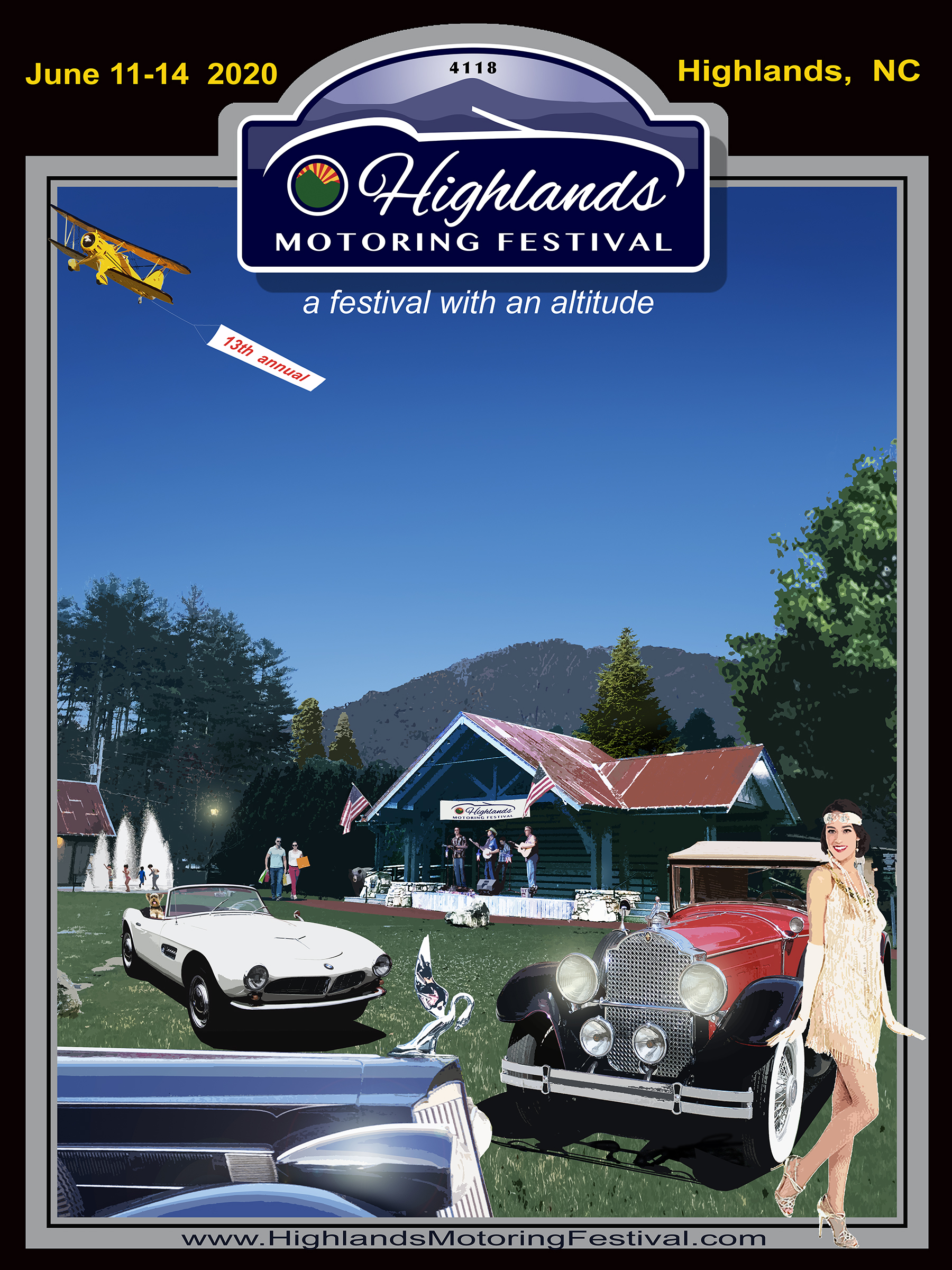 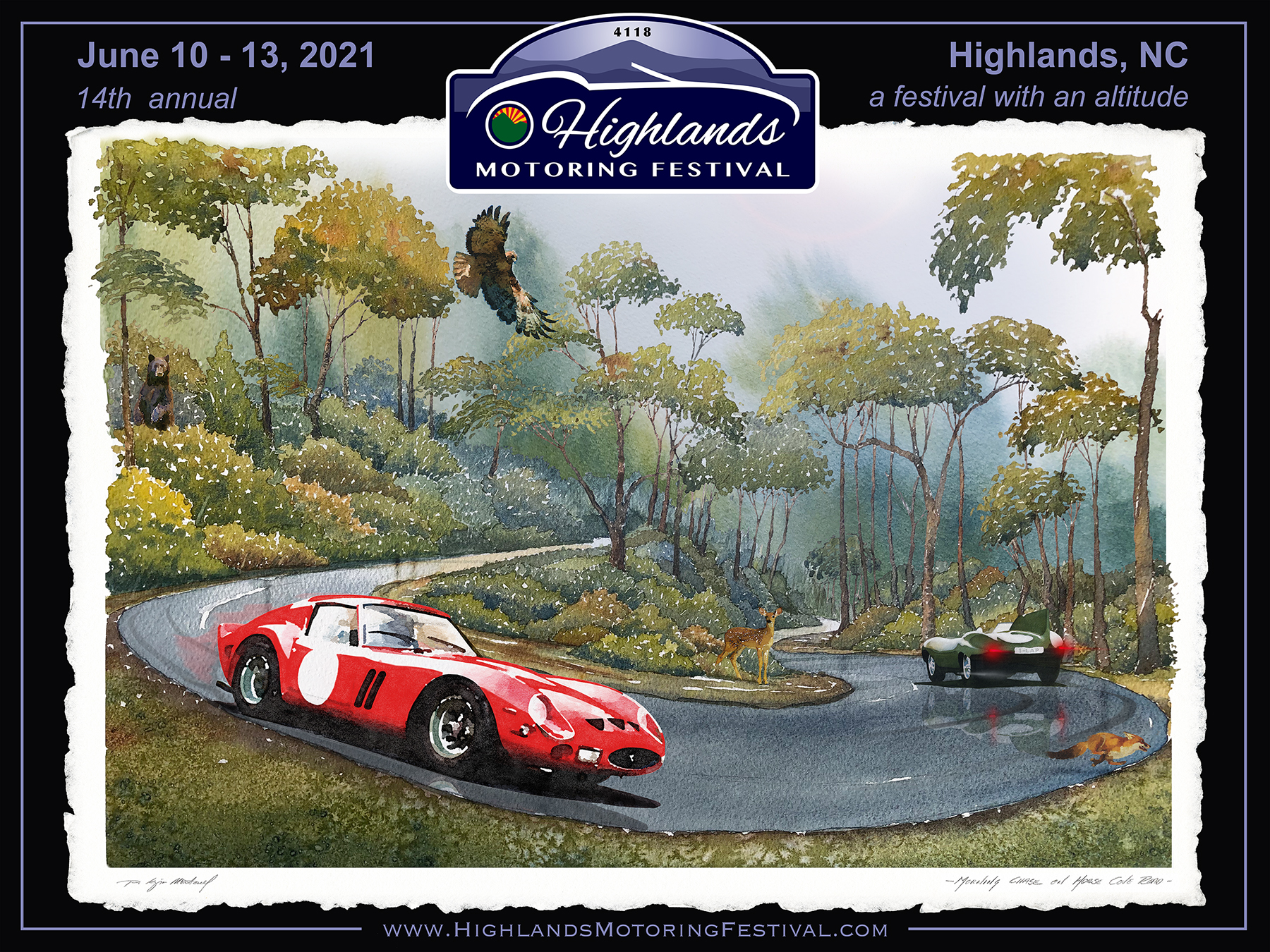 For more information on this year’s Highlands Motoring Festival visit the website:        http://www.HighlandsMotoringFestival.com