America’s manufacturing expertise found its humble beginnings in the clock workshops of Eli Terry of Plymouth Connecticut at the turn of the nineteenth century. It was a special time in American history. The new country was between wars with England. Its leadership was passed from the founding fathers to their protégés and the two party system was born as a compromise of diverse ideologies. The country was entering a period of prosperity. American society started to become a population of specialists. Trade routes were opening to the western reserve territories as the river and canal systems developed. Eleven states had been added to the Union by 1822.

Eli Terry was born a fifth generation American, in 1772. He completed his apprenticeship in 1792 under master clockmaker Daniel Burnap and with influence from Thomas Harland. Terry quickly established himself as the new master for the coming century. Terry began developing clock designs that could be produced for the common family. In 1806 he took on a contact with major retailers, the Porter Brothers, for the unheard of quantity of 4,000 clockworks to be completed in three years. To accomplish this feat several manufacturing milestones were established such as interchangeable components, powered machine tools, and the assembly line method. The photo shows clockworks number 3609 from the Porter contract series. Seth Thomas and Silas Hoadley were workers on the project and eventually bought out Eli Terry’s clock factory. But Terry envisioned a new kind of clock that would be suited to the newly emerging American market for consumer items. With the profits from the Porter contract, Terry was able to develop a compact shelf clock that could be produced efficiently using his mass production techniques.

The result of his research was the pillar and scroll shelf clock. His brother and sons were set-up with factories around the area to mass produce the design. An example is shown on the right. Eli Terry had correctly predicted the market and America’s hunger for reliable and compact time keepers. Two more major milestones followed the Terrys’ initial success. First was intellectual property enforcement and patent protection of manufactured items. Further, in the coming years, as his licensees used interchangeable components of his design, the purchased parts industry was created. Today we would call these tier two suppliers. In 1825 it was a cottage industry doing business largely by bartering. Many of the great American clock makers emerged from Terry’s shops as graduate apprentices armed with knowledge of advanced manufacturing. 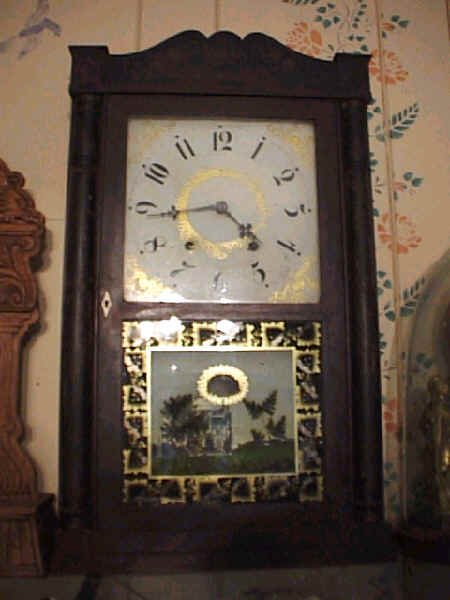 As America’s taste in styles changed from Empire to Gothic to Victorian, the shelf clock also evolved. Brass plates replaced the wooden works, springs replaced weights, and eventually balance springs replaced pendulums. The vision of Eli Terry was fulfilled as he created the clock industry of Connecticut and thereby the roots of America’s manufacturing industry. 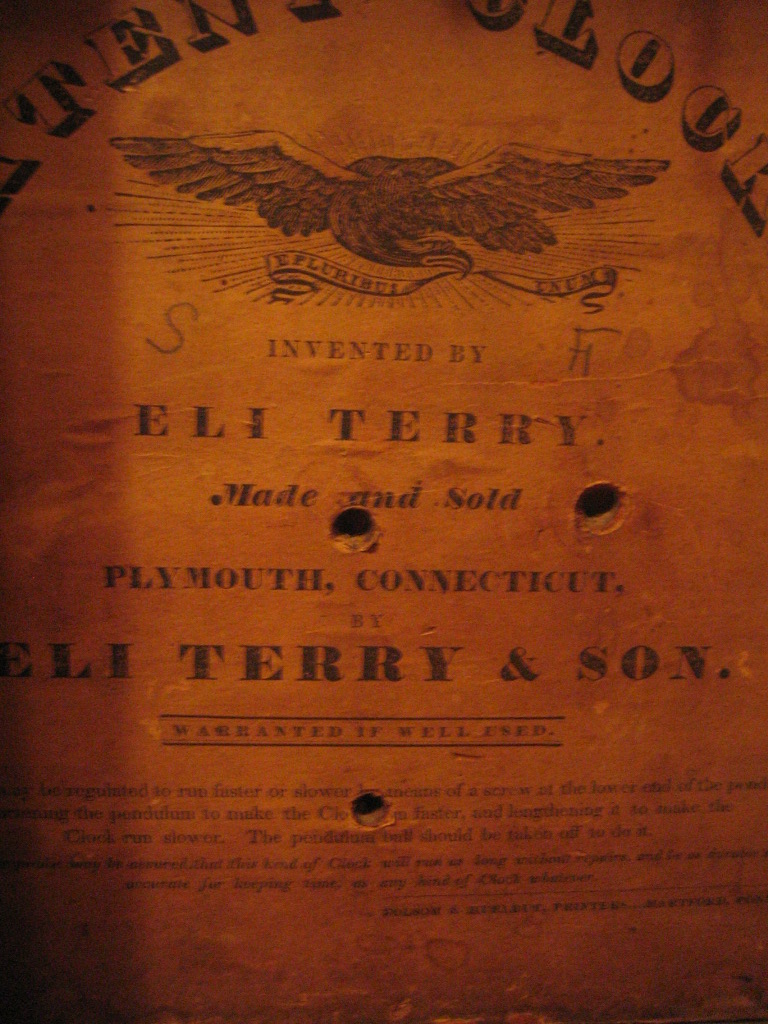 One of the best ways to establish the manufactured date of an early antique clock is to determine the printer of the clock’s printed paper label found on the inside backboard.

At the bottom of the label there is often a “printer’s line” or advertisement. The following table is a work in process of my research on many of these printers.